On Wednesday a woman of 70yrs old, Helen Udugbezi, was, killed with a big stone by unknown people, at her dwelling on Guobadia street, off Country Home Motel road, Benin, Edo State.

Read the report from ITV below.

According to ITV, Anna Amos, a house maid who was at home when the incident occurred, claimed that she was almost stabbed and raped by the killers who gagged and blindfolded her before killing Helen. .
..
According to her, “I was working when the boys entered the house. I wanted to shout and one of them wanted to stab me. ‘Another one said I was still a small girl; they tried to rape me but I said no. .
..
I heard a noise but I didn’t see what they were doing. ‘Then, they put a stone on my hand and asked me to say I kill mama.” Harrison, the son of the deceased, however, express surprise that his mother was killed in such a brutal manner. .. 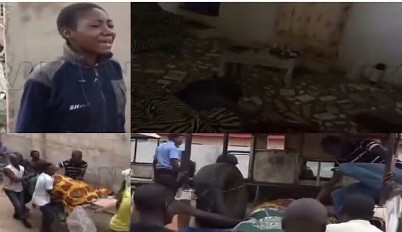 Check this:  How to Take a Solo-Entrepreneurship to the Next Level