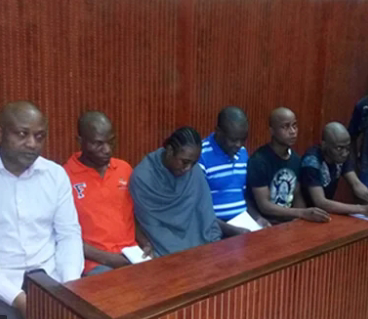 Chiemeka Arinze, a co-defendant with alleged billionaire kidnap kingpin, Chukwudumeme Onwuamadike, has died in prison custody.
Vanguard reports that a source who pleaded anonymity said Arinze died on Friday, November 26, 2021. The source said the counsel to the late defendant had filed a bail application before the court last week, over the illness of the defendant.
The source also said that the continuation of trial in the case is coming up today (Monday), and it was slated for the bail application to be heard before they heard of the death of the defendant.
It was gathered that Arinze, who had been sick, was rushed from the prison to a General Hospital on Friday, where he later died.
Evans is standing trial alongside, Joseph Emeka, Chiemeka Arinze, and Udeme Upong, over the attempted kidnap of Chief Vincent Obianodo, the Chairman of the Young Shall Grow Motors, before Justice Oluwatoyin Taiwo of an Ikeja Special Offences Court. They are facing a seven-count charge of murder, attempted murder, conspiracy to commit kidnapping, attempt to kinda, sale and transfer of firearms.