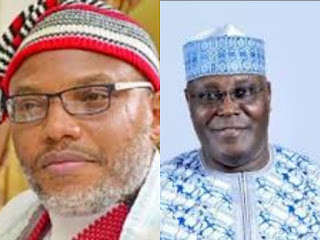 Leader of the Indigenous People of Biafra (IPOB), Nnamdi Kanu, has stirred another controversy from his hideout in London, by alleging that Atiku Abubakar is not a citizen of Nigeria, but a Cameroonian.
“Do you know that Atiku Abubakar is from Cameroon? His area of Adamawa was in Cameroon”, Nnamdi Kanu said in a live broadcast on Radio Biafra on Saturday.
He blamed Mr Abubakar for Alex Ekwueme’s failure in the 1999 presidential primary of the PDP. “Some of you do not understand that the person behind the failure of Ekwueme in 1999 during PDP convention was Atiku.”
Mr Ekwueme, a former vice president of Nigeria, lost the presidential ticket of the PDP in 1999, to Olusegun Obasanjo. Mr Obasanjo later picked Mr Atiku as his running mate and won the election.
Check this:  Police reacts to killing of inspector by protesting IPOB members