6-man syndicated has been arrested by Lagos State Police Command who specialised in robbing Lagosians of their mobile phones and turning over its SIM cards to hackers who get hold of the account details of its owners and transfer its balances to their accounts.

Parading the group today, the Commissioner of Police, Mr. Imohimi Edgal disclosed that the syndicate comprised of three splinter groups visiting choice locations in the state to rob members of the public of their phones.

He noted that the group handed over the SIMs to another set of people that would, through special computer apps, get the bank account details of the owners and thereafter get the account balances.

Edgal added that the balance of the account is now transferred into different accounts sourced by another set of suspects. Nwanze Ifeanyi (27), Martins Achi (27) and Solomon Dike (31) rob people of their phones and flee the scene on motorcycle.

Muritala Mohammed (28) a.k.a Swallow, through computer apps, retrieve the names, bank details of the original owner of the SIM, including BVN. The recovered details are used to determine the account balance.

Money in the account are transferred into different accounts sourced by the third group involving Shamson Mustapha (25) and Ali Hassan (27).

Check this:  Policemen seen fighting each other in Edo State have been arrested

The activities of the group were brought to the attention of the Decoy Team of the Rapid Response Squad (RRS) when they stole the phone of one Yinka at a birthday party in Egbeda area.

They worked on the phone’s SIM card and transferred N1, 153,000:00 from her account. Yinka only got to know of the transactions when she inserted the replaced SIM into a new phone.

According to Muhammed, an SS 2 drop out of Ojo High Secondary School, Lagos, he started hacking into bank accounts of people in June 2017. “My first hit was N20k. All the SIMs that I have worked on should be up to 47”, he said. 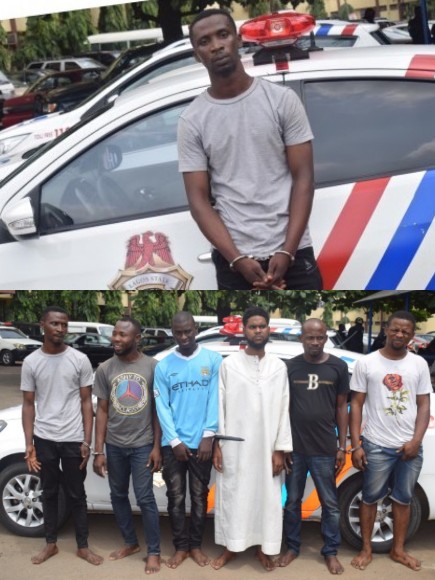