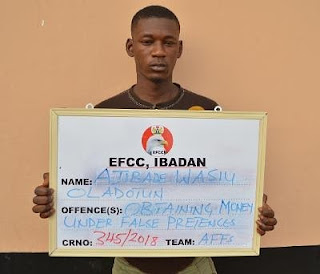 The Economic and Financial Crimes Commission, EFCC, Ibadan Zonal Office on January 21, 2019 arraigned one Ajibade Wasiu Oladotun before Justice M.A. Onyetenu of the Federal High Court sitting in Osogbo, Osun State on a three-count charge bordering on obtaining money by false pretence and possession of false document.
One of the counts reads: “That you, Ajibade Wasiu Oladotun sometimes in the month of March 2017, at Ile-Ife in Osun State, within the jurisdiction of this Honourable Court, with intent to defraud, did obtain by false pretence the sum of $2,300 (Two Thousand Three Hundred Dollars) from one Chris Odom who resides in the United States of America, under the pretence that you are a woman named Lola Parker, ready to marry him and that the money was to be part of the air ticket from KLM flight from Lagos, Nigeria to Seattle in the United States of America, which you knew to be false and thereby committed an offence contrary to Section 1 (1) & (2) and punishable under Section 1 (3) of the Advance Fee Fraud and other Fraud Related Offences Act, 2006”. Oladotun pleaded “not guilty” to the charges.
Prosecuting counsel, Adeola Elumaro, thereafter, applied for a trial date and for the defendant to be remanded in prison custody.
However, counsel for the defendant, Babafemi Iyiola, moved his bail application.
Justice Onyetenu granted the defendant bail in the sum of N20 million and two sureties in like sum, one of whom must be a civil servant not below grade level 14.
The case has been adjourned to February 26, 2019 for trial, and the defendant remanded in prison custody pending when he meets the bail conditions.
Check this:  I know you are close to the owner of the school, if you want disrespect, you shall be served” – Ubi Franklin reacts to Kate Henshaw’s video