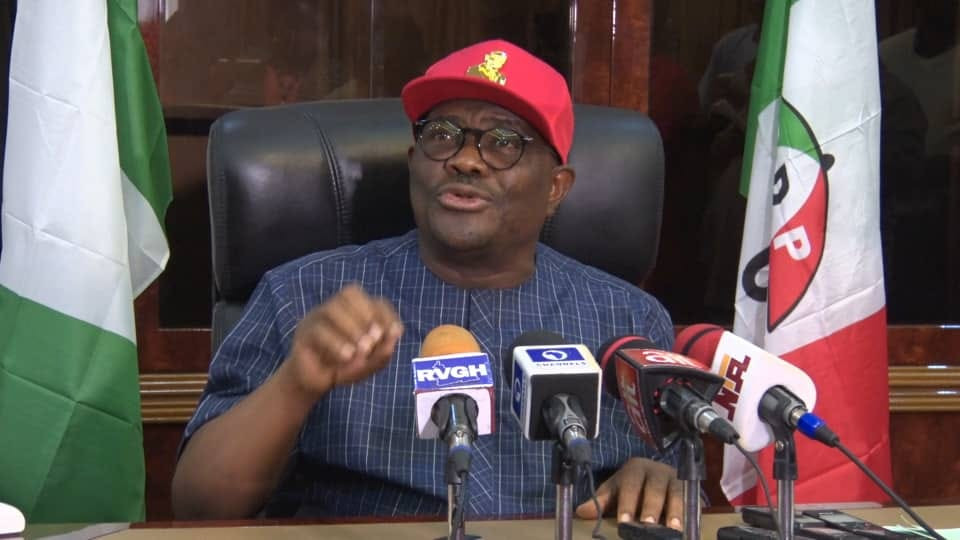 Rivers State governor, Nyesom Wike, has reacted to the allegations leveled against him by the Nigerian Army, accusing him of electoral malpractice and sponsoring armed thugs to disrupt last Saturday, February 23rd election.

Recall that the Nigerian Army had a press briefing in Port Harcourt, the state capital yesterday, where they accused Governor Wike of being involved in series of electoral fraud during last Saturday’s election.

Reacting to the allegations, the governor at a media briefing held at the state government house, stated that the State Government has written to the International Criminal Court to prosecute the General Officer Commanding ( GOC) 6 Division of the Nigerian Army, Major General Jamil Sarhem for crimes against humanity.

According to a statement released by his media aide, Simeon Nwakaudu, Governor Wike at the press briefing, said instead of running in circles, the killer GOC should explain to Nigerians the reasons why the 6 Division stormed the Collation Centres in Ikwerre, Emohua and Okrika Local Government Areas with INEC Electoral Officers accusing him of stealing electoral materials and concocting results.

The Governor added that the General Officer Commanding 6 Division has the blood of Rivers people on his hands, stating that issuing false statements will not save the GOC from prosecution. Governor Wike described the allegations against him as false, malicious and diversionary .

Check this:  What I asked for vs what I got: Customer disappointed after trying to recreate Mercy Aigbe's outfit

Governor Wike stated that he has credible intelligence that the GOC has concluded plans to open fire on his convoy, with the objective of causing a deadly shoot-out.

“Nigerians watched in utter dismay as three Local Government Electoral Officers of the Independent National Electoral Commission (INEC ) indicted soldiers of the 6 Division of the Nigerian Army for orchestrating electoral violence, snatching election materials and criminally colluding with APC leaders to concoct results during the Presidential and National Assembly elections. Rather than respond to these allegations, the GOC is making diversionary allegations.

“These weighty indictments of the officers and men of the 6 Division of the Nigerian Army by the INEC Officials confirm earlier intelligence that the General Officer Commanding (GOC) of the 6 Division, Major General Jamil Sarham is neck deep in the killings of Rivers people and manipulation of the elections. Mrs Mary Efeture Imawuya INEC Electoral Officer of Ikwerre LGA, INEC Electoral Officer for Emohua Local Government Area, Kenneth Etah and INEC Electoral Officer of Okrika Local Government Area of Rivers State, Mr Leo Okon who addressed the Rivers East Senatorial District Collation Centre at Elekahia were unequivocal in their indictments of the soldiers and their criminal activities during the elections”, he said.

“The major problem they should defend is the INEC Officers who declared that the soldiers of the Nigerian Army abducted them , carted away materials and concocted results”, he added.

The governor noted that it was the soldiers and the Minister of Transportation, Chibuike Rotimi Amaechi who abducted the the Electoral Officer of Ikwerre LGA and compelled her to write results.

Governor Wike denied ever making an attempt to compromise the electoral process . He denied ever offering money to the Soldiers to act illegally.

He noted that when the soldiers arrested the Rivers State Commissioner of Urban Development and Physical Planning, Dr Reason Onya for being among the approved PDP agents to escort materials, the Commissioner called him. He noted that he requested to speak with the Officer to demand the release of Onya who was on legal electoral function for the PDP. He said the officer who declined talking called back later and he informed him that Onya was on a legal assignment. He noted that no bribe was offered.

Governor Wike said in his capacity as Governor, he spoke with about 10 different officers when PDP official agents raised concerns.

The Governor said that the mischievous press briefing by the 6 Division is tantamount to a coup against a constituted authority.

“The Army cannot be a judge in their matter. You cannot parade officials on legal Electoral duties. You cannot change the narrative. They have violated all known laws” he stressed