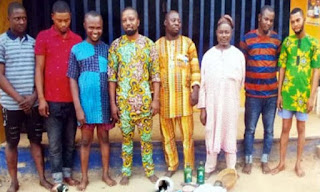 A shrine used by a syndicate to swindle people have been uncovered in Ago-Iwoye, Ogun State, leading to the arrest of eight suspects, among them a 72-year-old man.
The suspects who pretended to be traditional doctors, talk their victims into believing they have spiritual problems.
Thereafter, they would direct the victims to the shrine, with an assurance that they would get a solution to the problem, only to defraud them. .
The suspects are: Abiodun Bamgbopa, 72; Olashile Raheem, 35; Nureni Raheem, 32; Raphael Joseph, 24; Ganiu Olawale, 24; Adenubi Samiu, 25; Mustapha Lukman, 39, and Raimi Ramoni, 42.
They confessed to be capitalising on the gullibility of their victims to defraud them.
Check this:  29 people killed In fresh attacks in Zamfara State