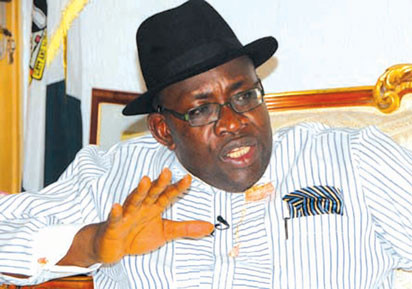 The Bayelsa State Governor, Seriake Dickson, has declined assent to the bill seeking a lifetime pension police for members of the state House of Assembly.

The lawmakers passed the bill into law on Wednesday April 24th after the Leader of the House, Peter Akpe, representing Sagbama Constituency 1, moved the motion for the debate.  The bill proposes a monthly pension of N100,000 for members while the speaker and deputy speaker would be entitled to N500,000 and N200,000, respectively throughout their life after serving in the Assembly.

In a statement released today April 29th, the State Commissioner for Information, Daniel Iworiso-Markson, said the governor conveyed the decision to decline assent to the bill in a letter to the Speaker of the Bayelsa State House of Assembly on Monday. According to Governor Seriake, the bill was inconsistent with Section 124 of the Constitution of the Federal Republic of Nigeria as amended. The governor argued that members of the State Assembly lacked the powers to expand the categories of public servants who should be entitled to a pension.

He said that he had to withhold assent to the bill because the State which was bedeviled with a lot of challenges in spite of its low Internally generated revenue base and unstable earnings from the oil economy was the only state out of Nigeria’s 36 states to come up with such a bill.

Check this:  Fake army major dupes job seekers with promises of employment in the Nigerian Military

According to him, he was guided in the decision by the principle that government should not be for a select class of the privileged in the society, and would not discard it over seven years into his administration.

He said that notwithstanding his decision to decline assent to the bill, he still holds the Assembly in very high esteem.