A suspected armed robber, later dubbed Police informant, stormed the office of the operatives of the Inspector-General of Police Special Intelligence Response Team (IRT), Lagos State Police Command, located at the Ikeja, GRA, and announced, “I’m a robber! My gang stole the missing truck and container, with its N147million worth of goods.”

The informant was quickly ushered into the office of Philip, a Chief Superintendent of Police (CSP) in charge of the IRT Unit in Lagos State.

After several minutes drilling under the unrelenting gaze of Philip, the story came pouring out of the informant. Yes, he truly was an armed robber. The operatives, who had seen a lot of characters in their line of work, knew there was a catch somewhere in his story and his willingness to surrender himself to the police.

The informant told them he came to surrender himself to the police because he wanted to be punished for his crimes, but he quickly added that he was not alone in the robbery operations.

He told Philip and other operatives that a police Inspector, identified as Mr. Asom Ubi, working with Special Anti-Robbery Squad (SARS), was the leader of the gang.

As the man further revealed the gang’s modus of operandi and the sharing formula of loots, the suspected catch in his surrendering himself, fell into place. The puzzle was complete. He was a robbery suspect allegedly cheated by Ubi. Vexed at being cheated, the informant decided to hand himself to IRT operatives, just to ensure that Ubi was also arrested.

According to him, he felt that if he went to SARS office at Police Command, Ubi might be allowed to go free since he was part of the SARS’s family, thus he chose IRT.

A police source said: “Ubi is among SARS operatives that newly joined the Lagos State Police Command. He has only spent a month at SARS, Ikeja, before he was posted to Onireke Police Station, after the police outpost was created. He was drafted there, and being the most senior person there, he was made the Station Officer (SO).”

Since Ubi started working there, different kinds of allegations had been trailing his footsteps. One of the allegations was that Ubi used to disappear from his duty post for more than two weeks or more. Whenever he was about to do his vanishing act, he goes with his rifle.

This rifle, according to a source at Onireke Police Station, was always in his car, contrary to police rules. Every policeman was expected to keep his rifle at the station’s armoury when leaving for home.

In the middle of this year, a truck, carrying 40 feet container, loaded with GNLD products was snatched. Two weeks after this truck disappeared, the stranger walked into IRT office. He declared that he was a robber and also had information for the police about the missing truck.

He met Philip and further told him that he was involved in the snatching of the truck. According to him, he was among those that snatched it. He promised to lead operatives of IRT to where the truck was kept.

The source disclosed: “When he was further quizzed, he said that they were a seven-man-gang that carried out the operation of robbing the truck driver and confiscating the products. He added that the operation was led by a police Inspector, attached to SARS, serving at Onireke police outpost.”

A stunned Philip was said to have quickly dispatched his men to Onireke, where Ubi was arrested. It was further alleged that Ubi confessed to the crime.

Acting swiftly on the heels of the informant’s information and Ubi subsequent arrest, Philip and his men embarked on intense investigation, leading to police invitations being sent to the driver and conductor of the stolen truck.

“The driver and conductor were brought for identification. The driver identified Ubi. The driver explained that the gang members bundled him and his conductor into the boot of a private car and later dropped them off along Ibadan Express Way. He said that they were robbed at night along Ikorodu road and that the gang made away with the truck and container,” said the police source.

Check this:  Police arrest man accused of raping woman and plucking out her eyes in Ondo

The source further said: “When the container was snatched, the gang went to Alaba International Market to sell the product. The gang also sold the truck and container. They sold the product for N45 million, but it was actually worth N147 million. Ubi told the police that he got N6.5 million in the deal. The informant was given just N150, 000. The informant felt the money given to him was too small. He approached Ubi and complained. Attempting to placate the informant, Ubi told him that the money the gang made from the robbery was not enough, stressing that the buyer was yet to finish payment. Not satisfied, the informant went to complain to other members of the gang.

“Other gang members told him that his share was actually N3 million and that it was handed over to Ubi. He went back to Ubi, but Ubi denied, insisting that the other gang members were lying. Angry and feeling cheated, the informant decided to give himself up to the police just to ensure that Ubi was arrested. So, on that fateful day, he walked into IRT office and announced to anyone who cared to listen that he was an armed robber. He was ready to go down and wanted to drag Ubi with him.”

A Deputy Commissioner of Police (DCP), Abba Kyari, in charge of IRT nationwide, said that although he was aware of the arrest of Ubi, he didn’t know or have the facts of the case. 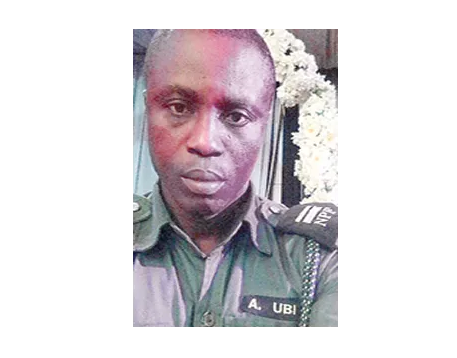