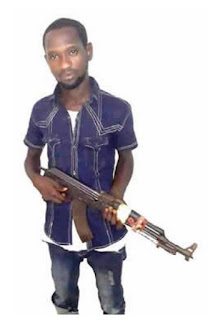 A 22-year-old herder identified as Ibrahim Umaru, has revealed how he escaped from prison in Delta State.
According to a report by Newtelegraph, Umaru escaped from prison in 2018 and fled to Zamfara State, where he joined a gang of bandits who specialised in cattle rustling and razing down communities. .
After embarking on several operations, Umaru was again rearrested after he led members of his gang to rob a filling station in Asaba, Delta State and an AK-47 rifle was recovered from him.
A police source said: “Umaru was first arrested in 2014 when policemen on patrol accosted him after he took some cows for grazing. The policemen searched and found a gun on him. .
He was taken to court, where he was charged for illegal possession of firearm. He was sentenced to five years in prison, but later escaped and fled to his home town and later joined a cattle rustling syndicate.
This gang has killed several people in Zamfara State. The gang was headed by Buhari Daji, who is now late.
Umaru took part in several robberies, cattle rustling and kidnapping activities in Zamfara State before returning to Asaba Delta State with an AK-47 rifle which he started using to terrorise residents and business owners in Asaba Delta State.”
After his arrest, Umaru said: “I escaped on one of the days I was taken out of the prison to cut grasses outside prison premises. I wasn’t wearing my prison vest, so I seized the opportunity to escape.”
Check this:  14yrs old girl commits suicide in Nasarawa after being beaten by her dad