An armed robbery suspect, Fidellis Nelson, 41, who was recently arrested by men of the Ogun state police command for operating a robbery gang that terrorize residents of Lagos and Ogun states,  says he went into crime so he could raise enough money to start his own church.

Fidelis and his gang members identified as Emmanuel Ogaba aka Tablet, 45; Matthew Ogaba, 30; Fidelis Nelson aka MP, 41; Augustine Stanley, 31; Abayomi Adebisi, 42, and Emmanuel Olusegun, 37, were arrested in Lagos while trying to sell off the cars they stole in Ogun state.

According to Nelson, he has a pastoral calling he would want to fulfill.

“I have a pastoral calling; unfortunately I don’t have money to start my church. I have had the calling for years, but no finance to make it a reality.

I am married with three kids. I am a professional driver. My wife doesn’t know that I am into robbery.  Since my colleagues are denying that none of them holds the toy gun during operations, I take responsibility for everything. I am the one that held the gun and drove at the same time during operations. I was the one who introduced Augustine into the gang. I had plans that when I establish my church, he would head the musical department because he is a talented gospel artiste.”

One of the arrested suspects, Augustine, said he is a gospel artiste.

“I am a gospel artiste; I perform at crusades, weddings and other social events. I met Nelson during a crusade programme. He told me that he loved my performance and that he would love to invest in my musical career. Early this month, Nelson asked me to follow him to an operation so that I can actualise my dreams. I told him that I have never done that kind of thing. He convinced me.”he said

The suspects would soon be arraigned in court

Check this:  check out the teaching on how to make this elegant yellow necklace bead. 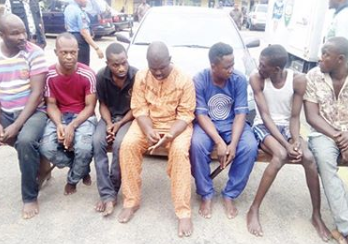