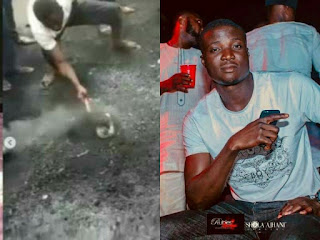 A Nigerian lady has taken to social media to narrate how her colleague, identified as Temitope Adeoye a.k.a Sodiq, was allegedly bu®nt to d€ath after he was wrongly accused of being a thi€f in Lagos state.
According to the young lady, said that Sodiq had just gotten to his bus-stop and was about to pay the motorcycle that will take him home when some boys in the area started shouting thi€f and pointing at him.
As he attempted to clarify himself, he was roughhandled, beaten up, $tabbed and then set ablaz€. He left behind a pregnant girlfriend.
”This is the picture of TEMITOPE ADEOYE,his Facebook handle is (A KAN JI) he is my colleague at work apapa tincan island port, was coming from work when someone people point him as th!ef he was bu®n to death instantly his mother d!ed last December and his girlfriend is heav!ly pregnant pls justice sodique justice for his family it happened last night along cele ijesha road
(adsbygoogle = window.adsbygoogle || []).push({});
In another post, the heartbreaken colleague of the decea$ed wrote;
”His name is SODIQ he is a clearing agent at apapa tincan island port he was going home last nite along cele ijesha road he dropped to pay the bike man when some guys out of nowhere started shouting th!ef th!ef th!ef he ran that he is not a th!ef but they caught him and started beat!ng $tabb!ng him till he was tired to move they remove his wristwatch his two phones and they set him on f!re the fellow colleague went to ijesha police station to report but nothing was done the friend that escape went to report but they detain him and transfer him to Pant! in yaba he was bu®nt to ashes and nothing was done till two of the cr!minals went to the station to report and they found his wristwatch and phone on them they are still at Pant! pls help repost till the Nigerian police will see this we want Justice for SODIQ
Watch a video she shared showing the Rema!ns of SODIQ below;
Check this:  Suspected vandal electrocuted while trying to steal electric cable from transformer in Lagos