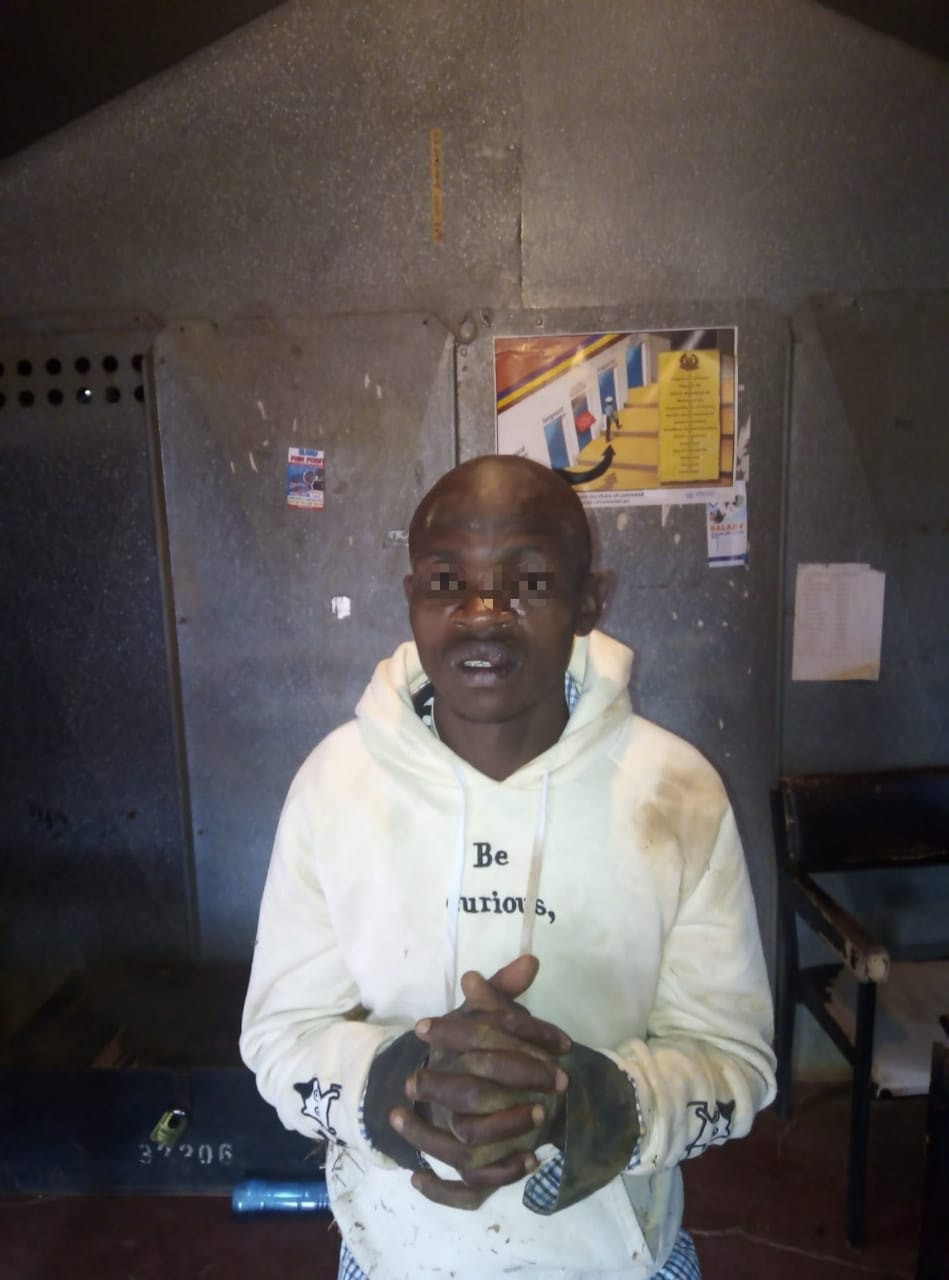 The suspected serial killer
Detectives from the Directorate of Criminal Investigations (DCI) have arrested a suspected serial killer and rapist who has been terrorizing residents of Ruiru, Kiambu County.
According to a statement released by DCI on Thursday, October 14, the suspect, Paul Magara Morara, who is believed to be a member of a cult, has been killing women and stealing their panties.
The DCI says the suspect, who was arrested Thursday morning, has brutally killed three women and seriously injured four others.
In a blow-by-blow account the DCI reveals that Magara’s heinous acts began in 2020 at Kiunguru area around Ruiru Bypass, when a woman who had been seen with him a night before was found dead in her room, with one of her breasts chopped off. 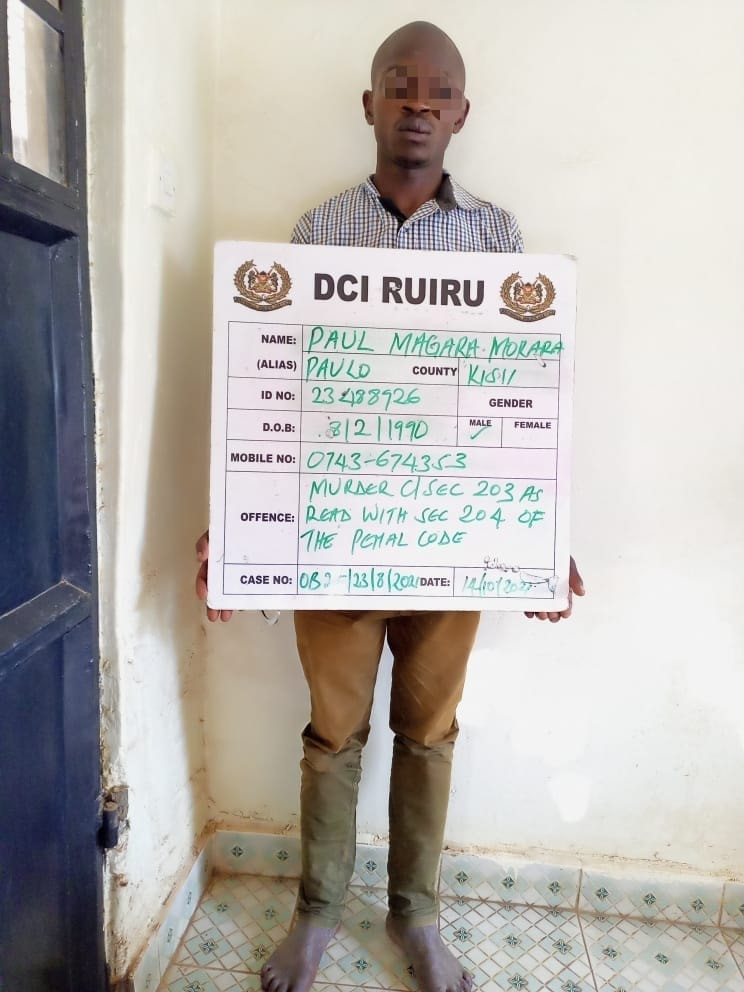 “Paul Magara Morara, 29, who has killed three ladies and seriously injured four within the period, was arrested today in a scrupulous operation by Ruiru-based detectives, who were acting on an attempted murder report.
Read the statement below…
“Shockingly, Magara has remained in the detectives list of wanted persons since 2020, but the masked hitman was only known by his alias name, Mkisii
“According to DCI Ruiru profiling, the masked Magara occasionally struck ladies in the hours of darkness, killing and seriously injuring some before removing and escaping with their panties
“It all started with one such shocking incident in 2020 at Kiunguru area around Ruiru Bypass, when a woman who had been seen with a man a night before was found dead in her room, with one of her breasts chopped off
Following the scanty leads obtained from the crime scene, detectives pursued the anonymous perpetrator for months but in vain
“Later in January 2021, a young lady who worked at a hair company was found murdered at a local lodging in a similar style, moments after she was spotted with Magara
“After months of receiving several related murder and attempted murder incidents all reported by female victims, another lady was found murdered in her rental house at Magorofani area of Wataalam
“The mysterious agent of death had caused untold panic and terror in the area, with word having it that a vampire was roaming in the dark hunting down women
“In what called for a round-the-clock manhunt for the perpetrator by all Ruiru sub-county officers, the killer struck again in September 7, by breaking into the house of two sisters aged 18 and 19, where he stabbed and left them for the dead. One of them is still admitted at Kenyatta National Hospital’s Intensive Care Unit
“As pursuit for him heightened, the bloodthirsty monster crept into the house of a couple when they were deep asleep early morning yesterday, stabbing the woman at the neck and vanishing in the dark in seconds
“The husband rushed his 22-yr-old lactating woman to hospital, amidst shock as to how their attacker managed to master their padlock from outside, execute the attack and disappear as he soundly snored. The woman is recuperating well
“Believing that the attacker was still around Wataalam at that early hour, police in Ruiru launched a thorough comb of the area, luckily managing to nab four suspects and recovering a mobile phone that belonged to one of the sisters attacked in the September 7 incident
“Hours of interrogations on the four revealed that one of them, 25-year-old Moses Moogi Okemwa was an accomplice of the prime suspect, who jointly executed some of the attacks.
“At the crack of dawn today, Ruiru detectives who had camped metres from the house of Magara’s brother ambushed the prime suspect as he headed to have breakfast at his kin’s place
“As early as 6am, the dusty 29-year-old had a backpack containing a hammer, 7 female panties and an electrical bulb holder
“Further investigations has so far revealed that Magara joined a cult back in 2013, which promised to be paying him for every kill on a woman. Strangely, showing a woman’s pants would confirm that he indeed deserved a pay. He had however been double-crossed after a Sh30,000 down-payment, but continued with the monstrous attacks
More investigations are ongoing with DCI Ruiru detectives dealing. 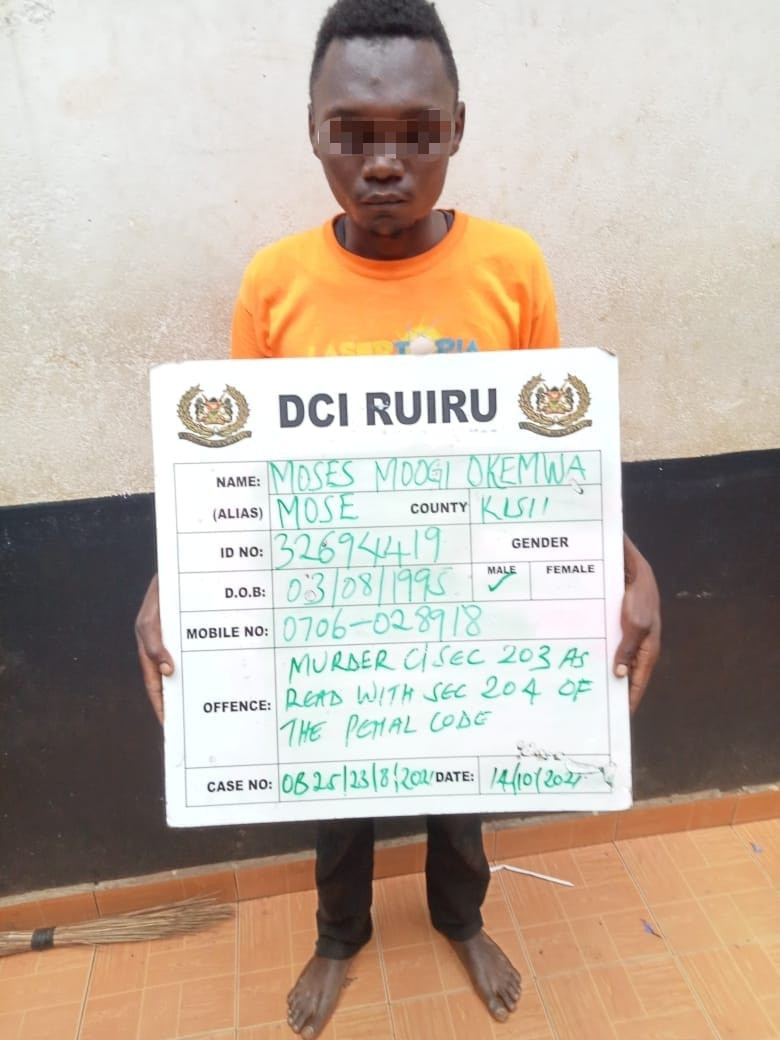