One Okwudili Okoro, have been arrested by the Ogun state police, for supposedly hacking his elder brother and his wife to death with machete.

Okwudili, said to be an apprentice under his late brother, Azuibike Okoro, in company of another person, the went to Ijako, Sango Ota residence of the deceased and hacked him and his wife, Jacinta, while taking their meal.

On 30th of march being saturday, Mr Abimbola Oyeyemi, the spokesman of the Ogun state police command, said the suspect was arrested, following a report that Azuibike and his wife had been hacked to death by kenneth the suspect, who came all the way from Sapon in Abeokuta to commit the heinous crime.

On questioning, according to the PPRO, the Ebonyi state born suspect, claimed to have served his deceased elder brother for 3yrs, and when it was time for his brother to settle him, the deceased kept on using delay tactics.

“He added that when he found out that his brother was not ready to “settle” him, he contracted one Kenneth who has fled and they bought two machetes, sharpened them and went to the deceased house in Ijako.

On getting to his elder brother’s house, they met the deceased eating with his wife and before he could say something, they descended on them heavily and hacked them to death.

Check this:  Man stabbed his friend to death over N1000 in Lagos. 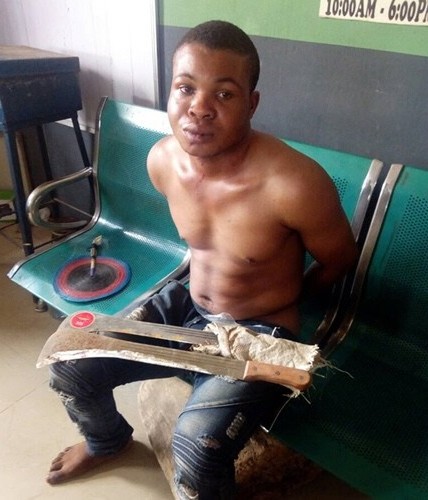