A mass grave containing the remains of 800 German soldiers killed in World War II has been unearthed during building work in the south-western Russian city of Volgograd, the German War Graves Commission said on Friday.

The discovery in the once fiercely-contested city, previously known as Stalingrad, was made while water pipes were being laid, the commission said.

Full excavation will be problematic because part of the grave is located beneath a housing development, it added. The victory of Soviet troops at the Battle of Stalingrad is considered a major turning point in the war. In the winter of 1942/43, it is estimated that some 700,000 soldiers and civilians died on both sides.

Some historians believe more than one million people died during the battle, with many of them freezing to death in below-zero temperatures. Many are still officially missing. The bones from the mass grave are believed to have belonged to soldiers, who died in the winter months of 1942/43, according to the association.

The men were buried hastily in a grave that also contained animals to contain the spread of disease. The association has been working with Russian authorities in the area for some 25 years.  If remains are clearly identified with the help of identifying features and historical documents, family members are contacted.

Check this:  32yrs old Man goes missing after being dropped off by his boss around Mile 2

The remains are then reburied in official military cemeteries such as Rossoshka, about 40 kilometres outside Volgograd. If identified, the newly discovered remains will also be brought there. 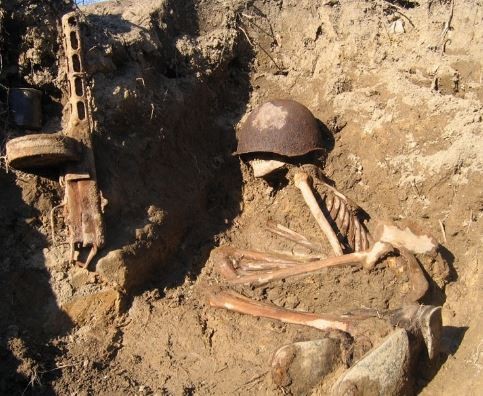