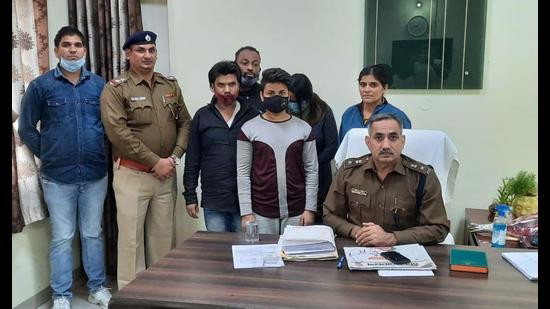 Four persons, including a Nigerian national and his girlfriend, have been arrested in India for allegedly duping people after befriending them on social networking sites, Faridabad police said on Monday, November 29.
Police said that the suspects who were arrested on Saturday, have been active in Delhi-NCR for the last one year and at least 50 cases were registered against the gang.
The suspects were identified as Chinonso Roy Akata, who lived in Delhi’s Tuglakabad, his girlfriend Sangeeta, Ajay Kumar of Bihar who lived in Delhi’s Jasola on rent, and Atif Ali of Bareilly in Uttar Pradesh, also a resident of Delhi.
Akata who is in his late thirties and Sangeeta were in a live-in relationship.
The passport of Akata who came to India on a student visa had expired six months ago and he was staying in India illegally, police added.
The suspects would befriend people on Facebook and then convince them to transfer money on the pretext of sending them costly gifts and foreign currency, said police, adding that all the suspects were arrested from Delhi.
According to the Faridabad police, they received a complaint from a 28-year-old engineer working at a private company in the city alleging that he was duped of ?5.78 lakh by a woman who befriended him online in October.
Narender Kadiyan, deputy commissioner of police (crime), Faridabad, said that the Nigerian national with the help of a Delhi woman formed a gang and started duping people after creating fake profiles.
“Akata and Sangeeta created fake social media profiles and befriended people by posing as women. They would tell the victims that they are visiting India along with their siblings to meet them to finalise the wedding. Later, the victims used to receive calls from a man posing as customs officer who would inform them that the duo are caught with valuables worth several lakhs of rupees and they have to pay custom duty for their release,” he said.
Police said that Akata’s bank account had transactions worth ?65 lakh in the past two months.
Basant Kumar, station house officer of Faridabad cyber police station, said that the suspects used to tell victims that they would get precious gifts as a token of friendship or would propose them for marriage. 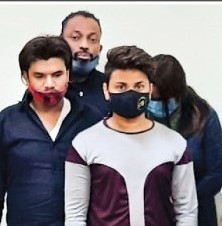 The SHO said that Ajay would provide Sangeeta and Akata SIM cards to make calls to dupe people, and Ali opened accounts for them to transfer money. “All the suspects were taken on seven-day police remand on Sunday after being produced before the court,” he said.
After an investigation by the cyber cell, an FIR was registered on Sunday at Faridabad cyber police station.
“Our cyber police team put the suspects’ numbers on surveillance and their locations were traced, following which they were arrested,” said SHO Kumar. 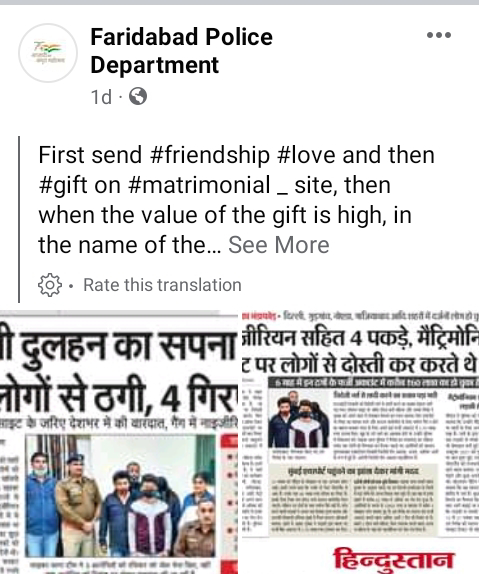