This man in this post pretend to sell soft drink and pure water on the  road side,it was said to have caught broken the driver side of Toyota corolla with hammer to steal phones and bags.

Read the statement below.

Its Chairman, Olayinka Egbeyemi, a Superintendent (SP), in a statement, said the suspect was apprehended by his men, who were positioned on the bridge.

The suspect, Egbeyemi said, was arrested after he broke the driver’s side glass of a Toyota Corolla car with hammer and snatched two phones and a bag containing valuables.

“Immediately the suspect was arrested and every item stolen recovered from him, the owner was called to pick up her bag and phones at the Task Force office at Bolade, Oshodi,” he said.

He said Commissioner of Police Imohimi Edgal has directed that the suspect be charged to court. Kayode, who hails from Abeokuta, Ogun State, was said to have confessed to have been using hammer on motorists who refused to voluntarily release their belongings during traffic on the bridge.

Check this:  What the English Premier League table now looks like (photo)

He was quoted as saying: “Yes I used hammer to break her vehicle side glass because the woman refused to surrender her bag and two phones when I approached her during traffic when it was raining”

The victim, Mrs Hadizatul Jiddah, praised the police for their prompt action. “If not for the prompt intervention of personnel of the Lagos State Task Force, my bag and two phones would have gone,” she said. 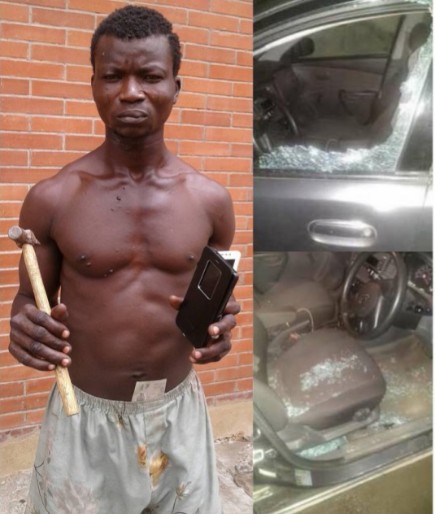