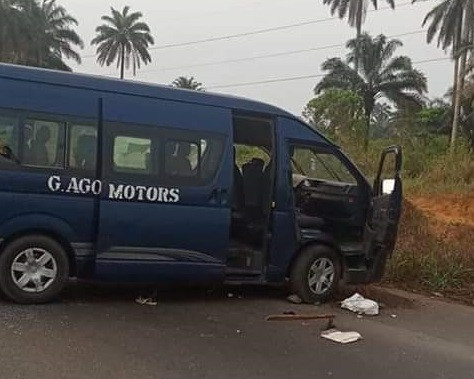 On Monday morning, Gunmen suspected to be kidnappers take control of a 14-seater commercial bus after killing the driver and two passengers in Rivers State.
The incident takes place within Rumuekpe, in Elele-Ndele axis of East West Road, in Emohua Local Government Area of the state.
It was get together that the bandits were responsible for violent crimes perpetrated along Elele-Ndele in Emohua, and other neighbouring community along the East-West road.
According to reports, the suspected kidnappers hijacked a Navy-Blue Hiace bus belonging to Agofure Motors after shooting sporadically at the vehicle and occupants.The gunmen then abducted the rest of the occupants after killing the driver and two other passengers.
An eyewitness, Sinachi, claims that only one woman was allowed to go because she has a bad leg
The spokesman of Rivers State police command, Nnamdi Omoni, is yet to confirm the incident.
Check this:  FUNAAB student bags 1yr in jail with grass cutting over fraud.