The Lagos state police comand have arrested a 58-year-old commercial motorcyclist, Johnson Okon, for allegedly defiling his 14-year-old daughter in the Ikorodu area of the state.

Parading the suspect before newsmen, the state commissioner of police, Edgal Imohimi, said  the victim had informed her mother about her father’s action. Her mother who did not believe her, asked her not to tell anybody. Angry that her mother was unwilling to act against her father, the victim fled their home and took refuge at her father’s friend’s house.

“The command’s Gender Unit is investigating a case of defilement reported by a 14-year-old girl against her father, Johnson Okon, 58, of Charismatic Road, Abule Berger, Ikorodu. According to the victim, after her father, who is a security man/okada rider, had defiled her, she reported to her mother, who did not believe her and warned her not to tell anybody. She added that because of her mother’s inaction, she ran away from home and sought refuge in the home of her father’s friend. The victim has been referred to the Mirabel Centre for medical examination.” Imohimi said

Also paraded was a 64-year-old man, Habib Abdullahi, who was accused of sexually assaulting a six-year-old girl in his apartment in Ikorodu, Lagos. Parading the suspect before newsmen, CP Imohimi said

“The Gender Unit is also investigating another case of defilement that occurred in the Ikorodu area of the state and reported by one Mrs Obinna, 37, of Selewu, Ikorodu on behalf of her six-year-old daughter against one Habib Abdullahi, 64, a carpenter of the same address as the complainant. During interrogation, it was revealed that onMonday,  December 3, 2018, around 10am, the suspect took the victim into his room and inserted his fingers in her private parts.

“However, her mother noticed that her daughter was unnecessarily irritated and withdrawn; so, she began to ask her questions and she revealed to the mother what Abdullahi had done to her. Investigation is ongoing into the two cases of defilement; the suspects will be charged to court soon” he said 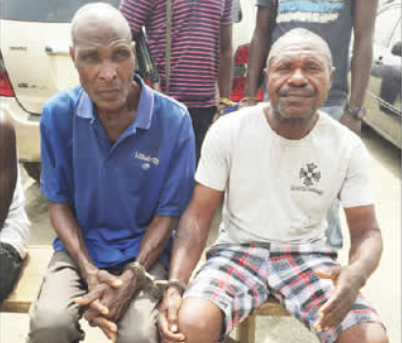 Check this:  UPTH MORTUARY ATTENDANTS STEAL THE EYES OF A DEAD CHILD