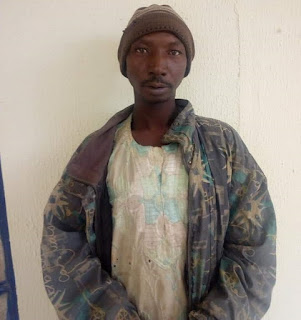 The Katsina State Police Command has arrested a notorious kidnapper who had threatened a renowed businessman to pay him N2 million or get kidnapped.
Spokesperson for the command, Isah Gambo, who confirmed the arrest on Tuesday, said that on February 12, at about 5 pm, the Command arrested notorious member of kidnapping syndicate, Magaji Gudaji, 30,  of Yandoka village, Dayi, Mallumfashi LGA of Katsina state who threatened to kidnap one renowned businessman (name withheld) of Malumfashi LGA of Katsina state or he paid the sum of two million Naira (N2,000,000:00K) as ransom.
In the course of investigation one Itel handset with the No. 08164374093 used in the commission of the offence was recovered.
Also a threat note written by the suspect was also recovered in his possession.  The suspect has confessed to the commission of the crime.
Check this:  35 year old man arrested for abducting four underaged girls and turning them into sex slaves in Kebbi