Revenue collector strangles his relative to avoid paying the N100,000 he borrowed from him 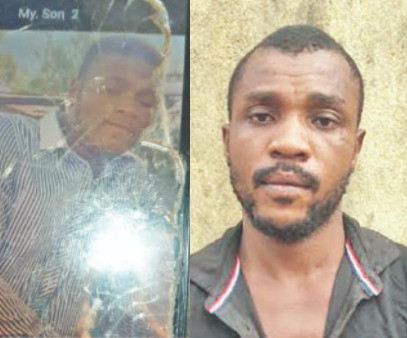 A community revenue collector, Ifeanyi Ezinwa Paul, 29, (pictured right), has told the police that he killed his 19-year-old kinsman, Victor Ebuka, pictured left, in order to avoid paying the N100, 000 loan he collected from the boy some time ago.

Recounting how he met how he killed Ebuka, Paul who is married with three children, said sometime in December 2020, he met Ebuka to borrow him the money with a promise to pay back on January 10, 2021. However, his inability to pay the loan made him conceive the idea of killing Ebuka

“I am married with three children. I dropped out of secondary school at SS2, months after my father died. I learnt how to drive and started driving commercial buses. It was not easy for me.

Two years ago, my kinsmen invited me to come and work for the community. My duty was to serve as a revenue collector for the elderly men in the community.

We have market days, and everyone was expected to drop a certain amount of money. It was going well, but I became greedy and spent part of the money I had collected on behalf of the community.

I knew I would lose my job if anyone noticed the shortage. It was out of desperation that I approached Ebuka, who owns a provision store in our village. He was my relative and we are from the same kindred in Umuleri.

We are from the same kindred in Umuleri. I borrowed N100,000 from him in December 2020 and promised to pay back on January 10. I could not meet up with the deadline and he kept disturbing me and threatened to report me to the Igwe, our king.

I made up my mind to silence him. I bought a loaf of bread and hid a sharp knife in it. I called him to meet me at Aguleri junction around 8pm. He came with an okada man and I asked the rider to go.”he said

Paul said in the process of trying to kill Ebuka, he sustained an injury but however, he overpowered the deceased and killed him. He said he went to the palace to report to the king that he was attacked by robbers and was taken to the hospital for treatment. However, the corpse of his victim was discovered the next day, leading to his arrest by the police.

‘‘I maintained that we were attacked, and that I narrowly escaped. When my wife and family members visited, I insisted that I was innocent. After I was moved to IRT, I had no choice but to confess. I cannot explain the devil that entered my head. I don’t know what to tell my family and kindred. They should all forgive me. What happened was the handiwork of the devil” he added