Rudeboy, CDQ and Zlatan did a song about me – Blessing Okoro tackles singers who mocked her over Onye Eze’s scandal (Video) 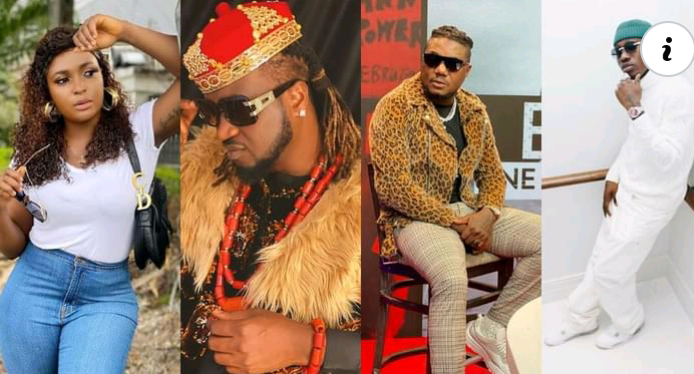 Relationship expert, Blessing Okoro takes to social media to reflect on singers who made a mockery of her after the viral Onye Eze’s scandal.
Blessing Okoro Zlatan Rudeboy CDQ
Recall that the self-acclaimed No.1 relationship expert in Africa got into a messy situation in 2019 after she flaunted a mansion that wasn’t hers in a bid to depict affluence which practically wasn’t real.
However, barely 2 years after the saga, the relationship blogger purchased a house of her own and has now chosen to reflect on how she got ridiculed by some musicians who derived inspiration from the unfortunate incident.
Sharing a video of Rudeboy’s ‘Audio Money’, she wrote:
“Them no cuff the gal🤣🤣🤣
Many of u never watched the video 🤣.
Those saying the song was not for me, e shock u now because the story don change. The song was written for me, they even had to replicate the story in the video of the song that was what made it relatable 🤣.
Don’t worry 1st December I will shoot my video .
The song inspired me too.
If e easy make rude boy sing for u 🤣.
Bceo . Audio to video .
That will be our hashtags December 1st. I will give away 500k ,”
As regards CDQ and Zlatan, she noted:
“Do you know that CDQ and zlatan also did a song for me 🤣🤣🥰.
I could now wait for the day I will boldly tell them thank you .
The song was mocking me sha 🤣🤣🤣. Even my dad heard it one day and heard my name and was calling me🤣🤣. They wanted to burry me, send me to depression but I refused .
I was determined to prove them wrong
December 1st I will show u all my house . This one does not belong to onyeze na Blessingceo get am 🙌🙌.
I did not just build house I own a street 🤣🤣🥰🙏🙏🙏..
Na lie I lie no kee person 🙌🙌”
See the post below:

Previous articleMan arrested and arraigned in court for setting his mother’s house on fire over food
Next articleVideo: Reality star, Cee-C make known her wedding date.