Senate president Bukola Saraki on Tuesday decried the level of insecurity and poverty in the country under the watch of President Muhammadu Buhari, saying that his government has failed Nigerians.

He described the hardship which the APC he helped to power in 2015 has subjected Nigerians to as unprecedented.
Saraki spoke on a live programme aired by four radio stations in Ilorin, Kwara State.

He sympathised with Nigerians, especially those from his home state, over the hardship he said they were going through particularly at this festive period.

He said the only solution to the present precarious economic and security situation in the country was for Nigerians to vote out the APC-led Federal Government and elect Atiku Abubakar of the Peoples Democratic Party as the nation’s President during 2019 general elections.

Saraki said, “Times are very hard for the masses as a result of the level of poverty in the country.

“Without sentiment, the present government has failed Nigerians. They must therefore ensure they vote for a leader that will address poverty and revive the economy.

“Nigerians will vote in February 2019 but the business community has already passed a vote of no confidence in this present government.

“I therefore urge Nigerians to vote out this government and vote a man (Atiku) that will restore investors’ confidence and get Nigeria working again. It is only one party that loves the common people and that is our party, the PDP.”

He added, “I am in politics to serve my people. When I campaigned in 2015, I pledged to Nigerians that my former party, APC, will address the issues of insecurity, unemployment and poverty but unfortunately the party has failed on all these three scorelines.

“I thank God Almighty for the position that was given to Kwara as the number three citizen.

“We have cut across our zonal intervention projects in the state which wasn’t possible in the first four years as a floor member at the 7th Senate because ranking members add more value to the community/constituency.”

The President of the Senate urged people of Kwara State not to be deceived by politicians who he said only come around about six months to election time.

Accusing the opposition members in the state of insincerity, Saraki challenged them to come out with their programmes for the people of the state.

He listed his intervention projects in the areas of education, power, road construction, water and empowerment schemes spread across the four local government areas that made up his Kwara Central Constituency. 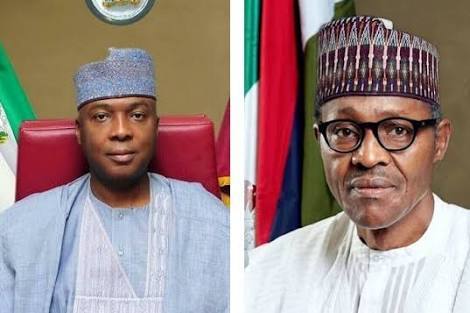