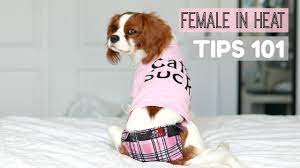 Your dog’s first heat can occur between the ages of 6 and 12 months; after that, your pet will go into heat every six months for a period of roughly 20 days.

Females reach sexual maturity (puberty) between the ages of 8 and 18 months; however, the maturation age varies greatly between breeds and even within a breed. A healthy bitch will come into season every six months on average from then on; however, some breeds may only come into season once a year or quarterly. In most seasons, the latter bitches are not fruitful.

A female’s body prepares for mating and the prospect of producing a litter when she comes into heat or season. Only when you understand your female’s heat cycle and when the optimal time to let the actual copulation happen can you have a successful mating.

This article is divided into two sections. The first piece discusses the many stages of each bitch heat cycle, while the second portion discusses the symptoms and indicators to look for when your bitch begins one of her cycles.

Previous articleThings to consider when buying a new bong or water glass pipe!
Next articleSigns Your Dog Is in Heat (and Basic Pregnancy Prevention)