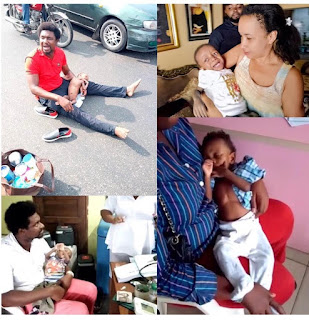 Benaiah Monday has died on his way to Dubai, where he was expected to undergo a major heart surgery.
His story caught national interest after a video of his distraught dad soliciting for help for him in Port Harcourt, Rivers State, went viral.
About 48 hours after the video hit the internet, Nigerians rallied around to donate over N70m towards his surgery.
How ever brave Banaiah was rush to the Lagos state General hospital this morning where the confirmed him dead.
Check this:  Tiwa Savage shares secret of her youthful look