Officials of the Nigerian Security and Civil Defence Corps (NSCDC) have arrested one miss Udoh Akpabio and her accomplice for alleged examination malpractice in the ongoing Unified Tertiary Matriculation Examination (UTME).

Akpabio was caught with a phone concealed in her underwear, while the examination was on at Baptist Academy, Karu, FCT. Also caught was Andrew Etziuzala, said to be aiding Akpabio in the cheating process.

They were caught with the aid of CCTV which sends live transmission of activities going on within the examination halls. While parading both suspects, FCT Commandant of the NSCDC, Patrick Ukpen, said Andrew introduced Akpabio into the chain of cheating during examinations.

The Commandant explained that while the examination was going on, Andrew, a student of Federal Polytechnic Nasarawa, was busy sending text messages of supposed answers to the questions she was expected to answer.

Akpabio, who said she applied to study Business Administration, added that she had sat for JAMB for more than four times and had been unable to secure admission. “My last score was 179,” she said.

Etziuala who was sending answers to her phone explained that the answers were generated by another member of the syndicate operating from a Business Centre in Jikwoyi.

He said the suspect at large, allegedly hacked into JAMB examination questions and generated answers which were forwarded to him (Etziuala), who in turn forward them to Akpabio in the examination hall.

Check this:  Court of Appeal dismisses motion filed by Onnoghen, says he must face trial 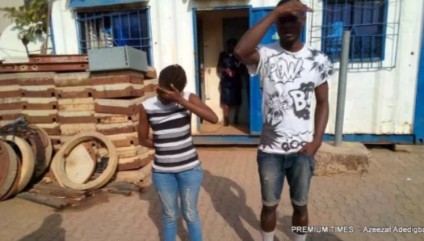