Video: Dowen College has not contacted me since my son passed — Grieving dad. 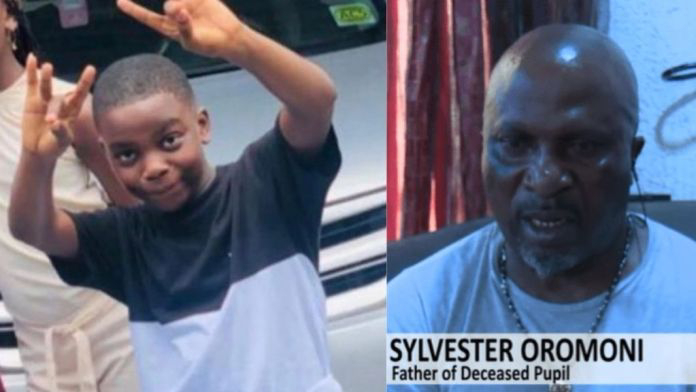 The father of late Junior Sylvester Oromoni in an interview disclosed that the owner of Dowen College, Lekki has not contacted him since his son passed away.
Recall Intel Region reported that Sylvester Oromoni died after allegedly fed chemical and beaten by his senior colleagues following his refusal to join cult. Reports also disclosed that the students involved in it have been flown out of the country by their parents.
The grieving dad during the interview with Arise news said the school, the principal the teachers have not called him since the death of his child.
He added that the only time the principal called him was when he sent the picture of him to the social media, adding that the principal accused him of sending the picture out because it is so scary.
The father said he needed to send the pictures out to show the world the pain his son goes through rather than the school claim that the died as a result of the hip injury he suffered from while playing a football match.
Watch the video below;

Previous articleGroom loses his parents, siblings, to a fatal accident after attending his wedding
Next article“The audacity” – Sylvester Oromoni’s sister says as she shares the message she received from one of the alleged killers of Sylvester (Screenshots)